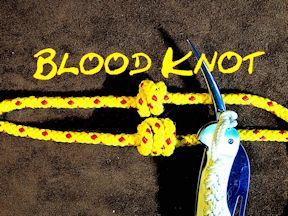 How to Tie the Blood Knot

In this short video I will show how to tie the Blood Knot. For those of you with a fishing background you will notice that this is probable not the Blood Knot used in fishing. I will do a video on that one a little later.

Basically the Blood Knot shown here is used as a decorative knot on the end of a Cat of Nine Tails. The whole idea is that this knots purpose was to inflict more pain than just straight forward lashes. However, one comment on YouTube, suggests that cats used at sea did not have the Blood Knot included. There is a version of the Cat of Nine Tails known as the “Thieves Cat” which was only used at sea for those caught stealing from messmates. He also suggested that the  “Thieves Cat” was used ashore by the army??

In the photo below, you will see that there are actually three rows of Blood Knots in this Cat of Nine Tails. I added three rows as I felt it added to the decorative ropework and also added a bit of interest to the work.

Basically the Blood Knot is a Double Overhand knot, but can also be trebled or quadrupled. Give it a go and see what you think of this rather simple but satisfying knot.

How to Tie a Blood Knot Video – No Chat Version

How to Tie the Blood Knot Video Tutorial

In this longer video on how to tie the Blood Knot, there is more friendly chat and banter…….. the choice is yours as to which one you want to watch.