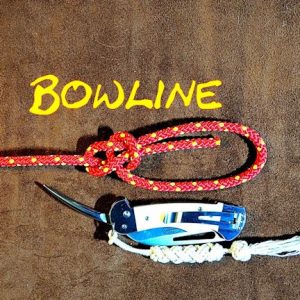 How to Tie a Bowline

In this Bowline tutorial we will not only be covering how to tie a standard Bowline, but also a very close relative the Cowboy or Dutch Bowline. In the How to Tie a Bowline Video, you will also be introduced to three different ways of tying a Bowline. When tying the Bowline, you will see the table top method of tying it. This will give you a better understanding of the actual shape of the knot. There will also be a quicker way of tying a Bowline.

How to Tie a Dutch or Cowboy Bowline

In researching these Bowlines, I did come across an article which said that the Dutch Navy adopted the Dutch Bowline, as it was better suited for their needs. I often wonder why the Cowboy Bowline or the Dutch Bowline are so hated, I often use it and it has never failed. I wonder if perhaps people take less care in dressing the knot correctly?

How Secure is a Bowline?

In general the Bowline is consider a good secure loop knot for general tasks. However, a Bowline can be given addition security by using the Ampersand method or Yosemite Bowline as examples of additional security.

How to Tie a Bowline Video