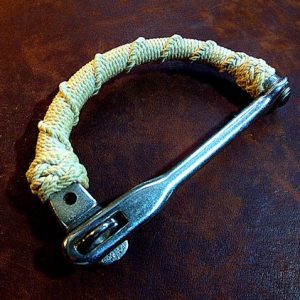 How to Tie French Hitching or French Whipping

French Hitching is a very simple but decorative way of covering an object. French Whipping can also be used to whip the end of a rope to prevent it from fraying or unravelling. I have used this in the past when I wanted to put a simple and fast decorative ropework on say a handle of some sorts.

When French Hitching you use on piece of cord and tie a hitch around the object constantly in the same direction. With Moku Hitching it is basically the same process, but two cords are used and the hitching of each cord is tied in the opposite direction. Here is a link on How to Tie Moku Hitching.

Here is what Ashley’s Book of Knots says about French Whipping: ….. is merely a series of Half Hitches. Start with a Running Eye and finish with the end tucked back under the last few hitches. The ridge of the hitches should follow the lay of the tope.

Ashley’s mentions above the way of starting and finishing French Hitching. Personally, I like to complete some of my French Hitching by adding a Turks Head at either end. The Turks Head adds a little more decoration, and is also a great way of hiding ragged ends. When I see a Turks Head knot, I will always ask myself “what horrors is it covering”.

How to Tie French Hitching Video

How to Tie French Hitching or French Whipping Video Tutorial. In this video, I demonstrate how to tie French Hitching to cover an object. I can also see, that I really need to up-date this video. So keep an eye out, there will be a newer version shortly.

What is French Whipping Used For?

French Hitching if often used on the ends for ropes, similar to Common Whipping, to prevent the rope from unravelling or fraying. It is also used to add a decorative pattern over and object.