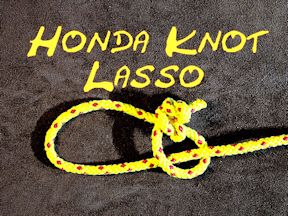 How to Make a Lasso

This is not a demonstration on how to make a lasso, rather it shows the actual knot process used to create the loop of a lasso. It would seem that a knot a lasso does not make, as the rope itself is also stiffened and waxed in a way to suite the end user.

The Honda Knot is a rather nice little adjustable loop knot. When you tie the first loop (prior to creating the Lasso) this in itself creates a rather nice fixed loop that can then be adjusted and locked.

The Honda Knot works well when used in a stiff rope as it forms a nice round fixed loop in the end of a rope. When the end of the rope is then passed through this loop a lasso is created. The Honda knot is strong, well strong enough to bring down a steer, one of the knots that has stood the test of time.