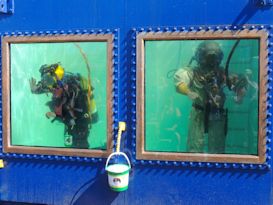 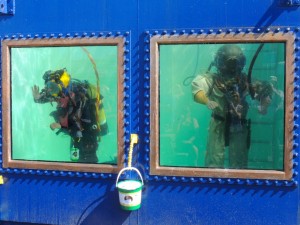 The International Guild of Knot Tyers were invited to display and teach knotting skills at Waterfest Weymouth. What a fantastic couple of days it was too.

This is one of those events where there is so much to see and do for the whole family. The Waterfest was laid out along the harbour wall in Weymouth, not only were there attraction and things to do on land, but also displays on the water. The Royal Navy, Wood Carvers, Boat Builders, Lobster Pot Making, Sailing Ships and of course Knotting Displays, plus much more was there to enjoy and interact with. Even Captain Jack Sparrow was there to the delight of children and some mums!

The IGKT was represented by knotters from the Solent branch, Bristol and also 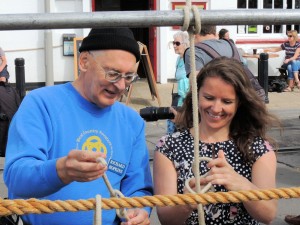 some locals to Weymouth. Hopefully as a result of the weekends display, with much interest from people visiting the stand, we hope to shortly start a IGKT branch in the Weymouth area. 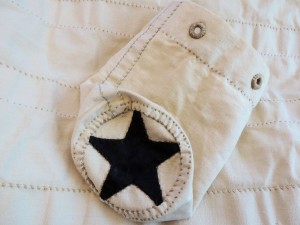 As usual the knotting display itself consisted of beautiful knotted work by members from all around the world. We were also fortunate enough to have some canvas bags on display by local sail maker, Phillip Rose-Taylor.

It was great to see so many people wanting to join Richard Hopkins in learning how to tie different knots.

Here are some images of the IGKT stand.

Ken is in the video below demonstrating the flying bowline knot:

It was great to see the RN team of divers showing old and new diving equipment in their windowed diving tank. The children especially loved it, as the divers would deliberately splash them! 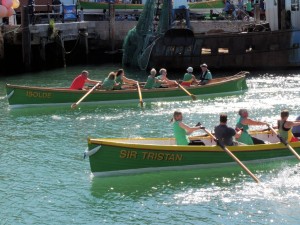 On the water in the harbour there would be regular boat races between Sir Tristan and Isolde.

All along the harbour wall were food stalls to suite every taste. 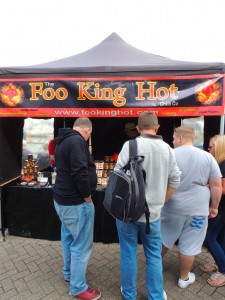 Yes, I know the above is a little rude! 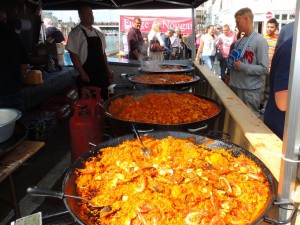 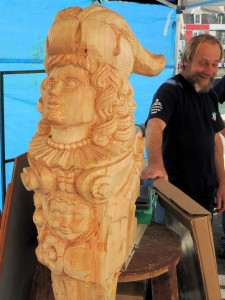 It was also great to see wood working skills from boat building to a demonstration on how to carve figureheads. The wonderful thing was that you could actually touch the work and talk to the craftsmen.

Another new sport to have a go at?

I will not even try to explain it, just click on the video below to watch it.