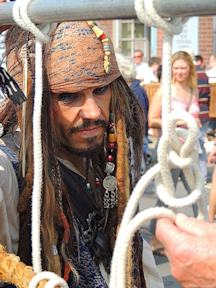 The International Guild of Knot Tyers were luck enough to be invited to have a display at the Weymouth Waterfest 2014. 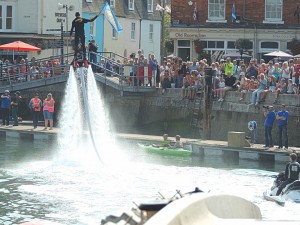 The event took place over the weekend and the weather was glorious for the occasion. The actual location was the old harbour of Weymouth, and stalls were on both sides of the harbour near the bridge. It really was wonderful day out for the whole family. There was so much to do and see including boat racing and Flyboarding.

The IGKT were grouped together with other practical skills. On one side there was 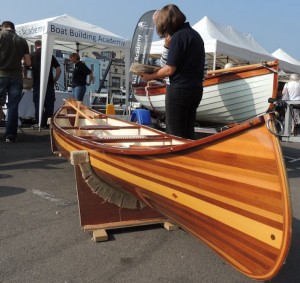 The Boat Building Academy, who had some wonderful displays of wooden boats. To be honest they were such works of art, I would be afraid to use it in case I scratched the polished wood. 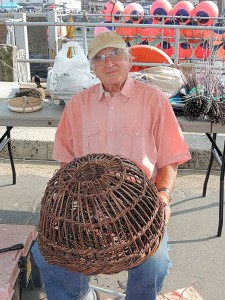 To the other side there was a chap who spent the whole day making a Lobster Pot. He arrived first thing in the morning, with an few bundles of Willow and then sat on his chair and started to make a Lobster Pot. I do not recall seeing him take a break, he would only occasionally look up to answer the odd question. At the end of the day he had produced a beautiful Lobster Pot that he gave away to a lady who asked the last question of his day.

The beautiful three masted French sailing ship Marite was also in Weymouth harbour for people to view. The IGKT were fortunate enough to be invited on-board on the Friday night for drinks and nibbles. Also on the dockside there was a group singing sea shanties. A lovely end to the day!

The photo below shows the Marite turning round in Weymouth harbour as she heads back home to France. 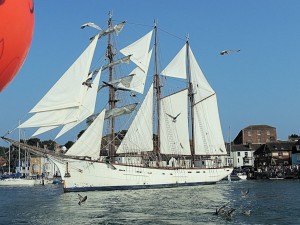 A P2000 Fast Patrol Boat for the Royal Navy was also along side and open to the public. 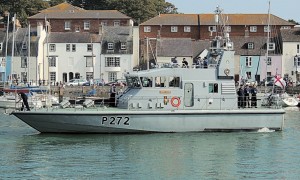 During the course of the day, we were fortunate enough to be visited by the famous 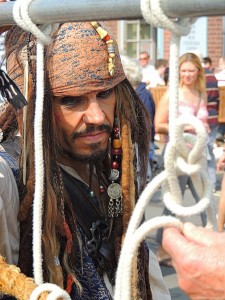 Jack Sparrow! However, I am not so sure that it was the real one, as he was learning how to tie knots? Surely an old “Sea Dog” would know how to tie a knots.

Gipsy Moth IV is a 54 ft (16 m) ketch that was commissioned Sir Francis Chichester in order to sail single-handedly around the world, racing against the speed set by the old clipper ships of the 19th century. 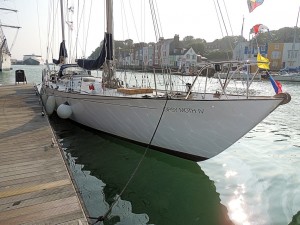 Here we have a video of Jeff Wyatt showing how rope was made on his miniature rope making machine.

Richard Hopkins is here showing how to tie some practical knots. 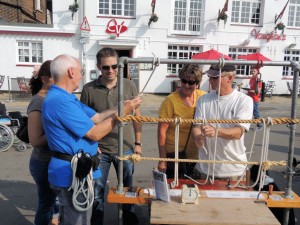