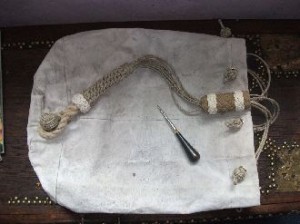 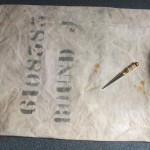 How to Make a Ditty Bag

Noun:
a small bag used especially by sailors to hold sewing implements, toiletries, etc. These days the ditty bag is very common among knot tyers for keeping their tools and cordage in.
Origin:
1855–60;  of obscure origin

I personally love to see other peoples ditty bags, as they are so very personal to the person that made it. Usually the ditty bag is not only used for holding tools or other items, but it is also a way for a knotter to show off their knotting skills (sometimes even their sewing and canvas skills).

How to Make a Ditty Bag

Here is the process that I went through when I created one of my ditty bags. It was my intention to create a ditty bag completely from scratch i,e. start with a sheet of canvas get sewing! However, in this particular case I found an old British Military Kit Bag at a car boot sale. I have to say that I was very pleased with my purchase, as it was very cheap, also it was quite weathered through age.

The actual kit bag was previously owned by a Bound J 6108383. This did cause me a little dilemma, as was not sure if I should change the bag in case it had some historical value. On doing a search the only reference that I could find at the time was here in the Supplement to the London Gazette 18 July 1944, where he is listed under Middx. R. Unfortunately I have no other information. Click on London Gazette Bound to see article.

The main problem that I encountered with the bag was the size. It was just too deep 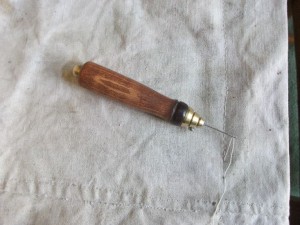 to be an effective carrier of all my tools etc. So I decided to cut off the top 9″ of the kit bag. I then folded over the top of the bag and hemmed it with a sewing awl. This was another new skill that I had to learn. 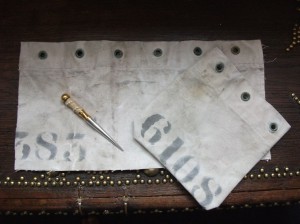 With the strip of canvas that I had cut off, I decided to turn them into detachable pouches. They idea was that they would hang from my ditty bag when “off duty”, then when required, they could be hung from my belt when I had to climb the rigging! Me climb the rigging……… I really do live in a dream world, I struggle to climb out of bed.

Once I had finished sewing the top hem of the ditty bag, I then inserted some brass eyes. To this day I actually regret doing this! I just wish that I had taken the time and sewn the eyes by hand with some nice stitching. I just remember at the time thinking how hard it would be to laboriously sew 8 eyes into the thick canvas. I am a bit of a girls blouse! 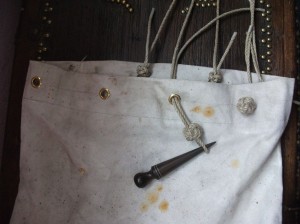 At the base of the bag I inserted a brass grommet and then attached a Monkey Fist Knot. This is so that I would be able to attach the handle of the cords, and carry the bag on over my shoulder. 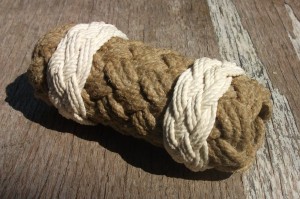 I created a rope slider, so that I could keep the ditty bag closed whilst transiting. I then created 7 bite 15 lead Turks Head over a piece of old copper pipe that I had loafing around the house. I then put a couple of cotton cord 8 x 5 Turks Heads to make it more decorative. I then removed the copper tube and covered it in a PVA finishing solution that I made up, this allows the Turks head to remain rigid.

The end of the draw strings were then tied together with a Mathews Walker knot. I then put an eye splice into an old piece of rope that I had and used the as a core for the eight strands that wrapped it in a sennet. Finally all the ends were cut off and then covered with a fancy Turks head knot. 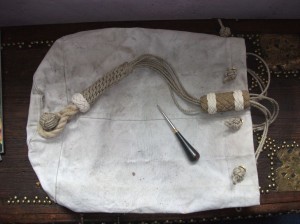 This is a close up of the end result in the making of a Ditty Bag. I have to say that I do find the removable pockets useful. It just allows me to take the things I need to complete a certain project, without the need of lugging a big bag around.