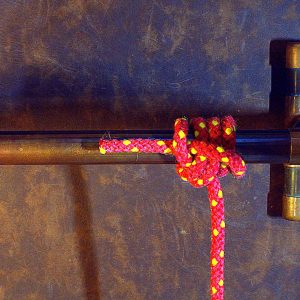 How to Tie the Ossel Hitch or Net-Line Hitch

The Ossel Hitch is one of the lesser known hitches, but I think that as a useful hitch it is still worth knowing. In the video below, I will demonstrate how to tie the more secure version of the Ossel Hitch. The photo below will also show what the Ossel hitch looks like when tied the simpler way. I don’t think there is a need for a video on that, unless you leave me a comment to say otherwise.

What is the Ossel Hitch Used For?

According to Art of Knotting and Splicing, by Day; United States Naval Institute, the Ossel Hitch is also known as the Net-Line Hitch. It says that their version of the knot was taken from the 1939 edition of Spencer’s Knots. The Ossel Hitch is used when backing lines (which Spencer calls Ossels are used to connect the backing and the headrope. The Ossel hitch is named as this hitch attaches the Ossels to the backing.

Like with most knots, a bight of rope can be used to make the knot slipped or quick release. I personally rather like the security of this hitch as any load on the standing part will lock the working end securely in place.

How to Tie the Ossel Hitch Video

Knots Similar to the Ossel Hitch

When I look at this knot, I can see a number of other knots that are similar in the way that they are tied. Ones that come instantly to mind are; the Camel Hitch, the Rolling Hitch, the Ground-line Hitch. What do you see in this particular hitch? Leave me a comment below and lets have a chat.