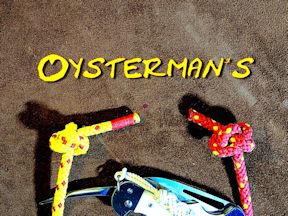 How to Tie the Ashley’s Stopper Knot

When the Osterman Stopper Knot is tied, it has a large base formed by the three rim parts. This is itself makes a rather good knot to use through the hole of a swing or for guy line runners on a tent/marque.

How to Tie the Oysterman’s Stopper Knot

It is quickly tied by starting off with and overhand noose. The working end is then passed over the standing end and tucked into the eye of the noose. The noose is then pulled up tight and a little care should be take in dressing the knot. The end result is a rather pleasing and decorative stopper knot, with three nicely formed rims at the bottom.

How to Tie the Oysterman’s Stopper Knot Video

In the video I show three ways of tying the Oysterman’s Stopper knot. Of course my favourite way is the last way, as it is easily formed by rolling the rope between the thumb and index finger.

Ashley – “One spring soon after my whaling experience I spent several weeks on an oysterman in Delaware Bay, having been commissioned by Harper’s Magazine to make a series of pictures of oyster culture. (Several of these now hang in the Mariners’ Museum at Newport News.) Over Sunday the fleet laid up at Bridgeton, New Jersey, and on Monday morning it got under way and sailed down the Cohansey Creek to dredge on the public beds off Ship John Light.

There was a fleet of perhaps two hundred sharpies, pungfys, bugeyes, canoes, schooners, and sloops, none with a motor, as the public beds are not open to power dredging. In the exodus down the narrow winding river the boats were crowded together as thick as a run of herring. At any time it appeared possible to walk ashore merely by stepping from rail to rail. But there was no fouling and no crowding; and what little chat there was consisted of friendly hails. It was just an average business day for the oystermen. Near the river’s mouth a big bugeye overhauled us, and as she drew alongside my eye rested on a huge knot at the end of the foresail halyard; it was far bigger than the common Figure-Eight that is the universal stopper for the ends of running rigging. As we dropped astern I questioned the crew of the Mattie Flavel about the knot, which I assumed was one peculiar to the oyster fleet since I had not seen its like before. To my surprise no one aboard could identify it. So, as I carried a definite impression of its appearance, I hunted up a length of rope and in a little while evolved a duplicate, as I believed at the time.

That was the origin of the knot which I have since termed the “Oysterman’s Stopper” (#526). A few days later, in Bivalve, the same bugeye tied up near by. On going aboard I found that the glorified Stopper Knot was nothing after all but an ordinary Figure-Eight Knot tied in the very gouty end of a long-jawed halyard. That was my first original venture in knotwork, although at the time I had no idea the Oysterman’s Stopper was original, I supposed that everything of so simple a nature had already been discovered.”