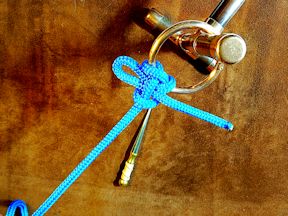 How to Tie the Painter Hitch or Tumble Hitch

Here is a link to the Highwayman’s Hitch

The Painter Hitch or Tumble Hitch is often used by Sailors and Cowboys/Ranchers as it is relatively secure when tied, but quick to release should there be a need for a fast release. A painter is a rope that is attached to the bow of a dinghy, or other small boat, and used for tying up or towing.

For additional security, I toggle or the working end of the rope could be pass through the final bight to prevent it from easily coming undone.

A word of caution would be, to only use this hitch as a temporary hitch and not used for critical loads.

How to Tie a Painter Hitch Video