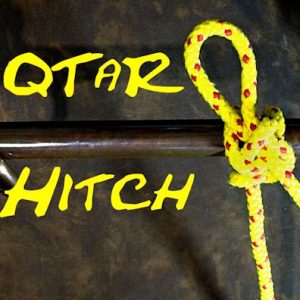 How to Tie the Secure QTaR Hitch

This is a little knot that I came across a few years back. The video was filmed in a foreign language and also the filming was not the best to actually learn how to tie this knot. So I studied this knot and refilmed it as a tutorial. At the same time in the video, I did ask if anyone knew of this knot and what the name of the knot was. I number of people responded saying that it was similar to the Highwayman’s Hitch, the Bank Robbers Hitch or Even the Painter Hitch. Yes similar, but just a little more secure!

How the Secure QTaR Hitch Was Named

Well, after shouting out and asking this little knot still did not have a name. Over time, I this knot grew on me, as it was so easy to tie, really easy to untie as it was slipped. I also found this to be a rather secure knot, that held firm. I even used Secure QTaR Hitch to tow my vehicle and it held up well. Some purist may hate the fact that the knot is slipped and could easily be tripped. However, I have often found that some knots that are slipped, if tightened and dressed correctly, it takes more than an accident to trip them. Besides, with most slipped knots, you can put a toggle in the loop or the working end through the loop to prevent them from being accidentally tripped.

This Has to be One of My Favourite Knots

Because of the qualities of the this particular hitch, I thought it deserved a name so the Secure QTaR Hitch was what I would call it. QTaR being that this knot is Quick Tie and Release. However, should someone come along and say that this knot has another name, then I will happily rewrite this post to reflect the proper name for this hitch.

How to Tie the Secure QTaR Hitch Video

How to Tie the Secure QTaR #Shorts Video

For those of you that like your videos in portrait format and less than 60 seconds, I have done a How to Tie the Secure QTaR #Shorts Video: