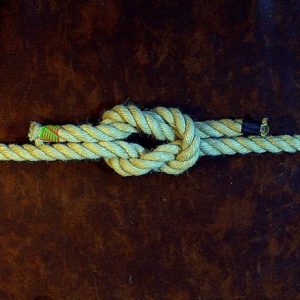 How to Tie a Reef Knot

Ashley’s Book of Knots says: “The Reef Knot is unique in that it may be tied and tightened with both ends. It is universally used for parcels, rolls and bundles. At sea it is always employed in reefing and furling sails and stopping clothes for drying. But under no circumstances should it ever be tied as a bend, for if tied with two ends of unequal size, or if one end is stiffer or smoother than the other, the knot is almost bound to spill. Except for its true purpose of binding it is a knot to be shunned.”

What is the Reef Knot Used For?

The Reef Knot should only be used for light duties; a good knot to use for tying up a bundle of sticks, used in a sling to support an injured arm, tying down part of a sail to reduce the sails effectiveness. Never should a Reef Knot be used as a bend (joining two ropes). When heavily loaded the Reef Knot will fail.

How to Tie a Reef Knot Video

In this video, you will quickly learn how to tie the Reef Knot and the second half of the video will show the knot being tied in slow Motion.

This is the longer video with the usual chit chat and additional information. If you want short and sweet, watch the one above, or endure this one!!