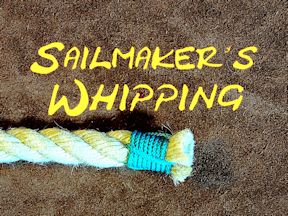 I personally think that Sailmaker’s Whipping is an easy and decorative way of whipping the end of a rope.

Sailmaker’s Whipping is perhaps the best permanent whipping for the end of any stranded rope. As with other whippings, it is most effective when applied in waxed whipping twine, a short distance from the end of the rope. The whipping should be as tight as possible, between one and one and a half times the diameter of the rope in length and finished with a reef knot between the strands.

I have to say that when it comes to whipping and other decorative knotting work, I really do love to use this twisted tarred line here: Tarred Line and Size Chart

ABoK #3448 – The British Admiralty Manual of Seamanship gives a very ingenious way of whipping that superficially resembles palm-and needle whipping. An ordinary three-strand rope is opened for one and one half to two inches, after first stopping the end of each strand. A waxed twine is middled and a loose loop laid around one strand, then both ends are brought out at the opposite strands. The rope end is carefully laid up again and stopped. The loop and the working end having been left long, with the working end make the required number of turns and put the loop that was left at the bottom over the top of the strand that it encircles. The standing end is now pulled taut, which draws up the loop and tightens the worming. The standing end is next wormed to the top and reef knotted to the working end, between the strands, where it does not show.