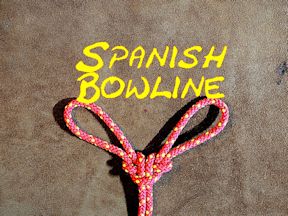 How to Tie a Spanish Bowline

The Spanish Bowline is one knot that I have avoided to tie, because I found all the tutorials on this particular Bowline rather complicated. However, I recently came across Alan Lee Knots on Youtube and he demonstrated and excellent way of tying this knot.

In Ashley’s Book of Knots, (202) he mentions that the Spanish Bowline can be used to suspend a ladder at both ends. I somehow get the feeling that in this day and age, health and safety would not allow this to be used.

Another mention of the Spanish Bowline is (265) where the Spanish Bowline can be used on an injured man. If the injured person is conscious then they could hold the rope, but it would be far safer if the person were also tied under the arms to the rope as well.

I have also seen it used to wrap cordage around large packages, whereby the loop are used to allow the cordage to change direction.

In this video you will learn how to tie the Spanish Bowline. This is the longer version of the video. If you want the short and sweet version on how to tie this knot, then check out the next video.

The Spanish Bowline is a beautiful, elegant and symmetrical knot!