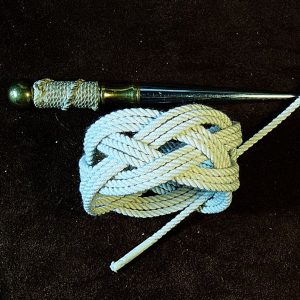 What Does Bights Leads and Passes Refer to on a Turks Head?

When you tie a Turks head, you are whether you know it or not creating Bights, Leads and Passes. When you first start out tying a Turks head, you are just overjoyed that you can actually tie a Turks Head. When I first learnt to tie a Turks Head, I covered almost every object that I could with it. However, over time I found that I wanted longer or wider Turks Head and the one that I had learnt did not cover all scenarios. Sometimes the Turks head looked rather narrow and stretched out. This is now where you want to start learning about Bights, Leads and Passes on a Turks Head.

When you first tie a Turks Head, eventually you will have woven your cord as per the instructions and you will that your working end of the cord back at the beginning of where you actually started (next to the standing end of the cord. So in other words you have created a Turks Head which is just one pass. If you then take your working end and follow the original pass all the way round, you will have completed a second pass.

In the photo below, you will see that this particular Turks Head has 3 passes

OK, this is what I see when I have created a Turks Head. I think of the top and bottom edges of a Turks Head as having a number of petals, or in technical terms the number of bights. I the photo below you will see that this Turks Head has 5 bights. Often the larger diameter of the object you want to cover, then the more bights you may want on your Turks Head.

So Finally, we now know that the above Turks Head is a 5 Bight, 4 Lead Turks head with 3 passes.

You may wonder if you can have a 4 Bight, 4 Lead Turks head, or a 10 Bight 2 Lead Turks Head? Well the answer is that some variations are possible whilst others are not. So you may be interested in the Turks Head Chart, where you will be able to see what is and is not possible when creating a Turks Head.

What is a Turk's Head Used For?

As the Turks head is a rather decorative knot on it’s own, it is often used a a decorative addition to a knotting project. The Turks Head can also be used as a covering knot to hide untidy strands on a project. Turks Heads can also be tied and then laid flat to create a rope mats.

In the image below, this rope Turks Head has 4 Bights, consists of 3 Leads and the rope has been passed around the weave twice.