It was a garden party where the theme was Victorian Games, as Knot Tyers we made it games with string.

We recruted a Cat’s Cradle enthusist Ali, Ali was able to show folks a blast from the past, many Grans went home with refreshed skills to share with thier grandchilderen.

On our games table, we had a yo-yo , diabolo and cup and ball. I had fumbled with the diabilo, blamed the string and the top/dolly, to have a young lad called Joe step up and give me a Master Class, he did many tricks with it incuding firing it 30 ft into the air and then catching it on the string.

Gordon was at his rope making machine, with small helpers with big smiles when they walked away, after they had made their own rope.

Bob as well as showing rope tricks, was asked for advice by two young ladies, who wished to make a knotboard with the knots that could be found in “Swallows and Amizons” with luck we have been prommised a photo for our website. Meanwhile Lesley was knocking herself out, running the quoits stall, with families, playing with rope grommits. All of this oversean by Chris, who encouraged others to have a go.. 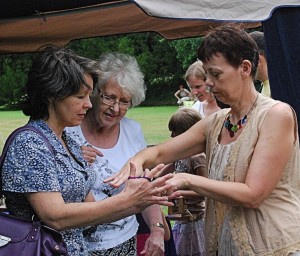 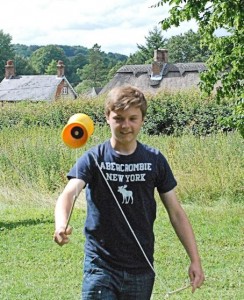