How to Make a Long Knife Lanyard

I do rather like this particular lanyard because it incorporates a number of different skills, it can also easily be wrapped around the wrist or through a belt. This particular style of lanyard comes from Toss The Rigging Handbook.

Lanyard from the Toss the Rigging Handbook

This is an excellent book for anything to do with “tools and techniques from modern and traditional rigging”. It also has a small section on decorative rope work. However I have to say that it is a very comprehensive and hefty book that mainly deals with the rigging. If you just want to do decorative rope work, then maybe this is not the book for you?

How to Make a Decorative Knife Lanyard

Within the decorative rope section of this book, there are instructions on how to produce a rather fancy looking knife lanyard. I personally have now made a number of these using different types of cord thicknesses and length. I would say if you are making one to yourself, think about the type of cord and length that you would require for your particular needs.

When starting this project it is best to start by making a star knot. Before you actually create the star knot itself, you need to middle 3 18 inch strands of cord, then about an inch and a half on the centre tie off the three cords with a constrictor knot. Then break the three strands together like plaiting hair, the actual braiding should be about 3 inches long. Once again centre the three strands and tie together where the braiding finishes at each end, giving you six strands and a braided loop. Now that you have done this, you can create a star knot using the stick strands, in other words you are creating a button. This can then be put to one side whilst you create the actual lanyard.

Now that we are at this stage I just wish that I could draw! However there are many examples of Sinnet on the internet and also in other knotting books. I find it best to hang the part completed lanyard over a peg or nail before you start.

In this particular case you take three adjacent strands into each hand. Then take the upper most left strand over the next strand and under the next one, so that it end up as the lower strand in your right hand. Now take the upper most right hand strand and moving to the left under the first strand and over the next two, it will then be the lower strand in your left hand. Then repeat as before with the upper left hand strand. Keep on going till you have a length that will fit nicely around your wrist.

Now finish off the Sinnet with a Matthew Walker knot or another decorative knot of your choice.

Take the three upper most strands and plait together for about 2″ and do the same with the lower three strands. Once you have done these you can then slip on the Star knot that you made previously.

Now tie another Matthew Walker Knot of something else decorative so as to close off the two plaits and keeping the Star knot locked in place.

Six Strand Half Round Sinnet

At this point you could use the Six Strand French Sinnet as before or follow a new pattern. Once again my drawing skill fail me so a search for the Sinnet is advised. YouTube is a also another good source for learning how to do this. 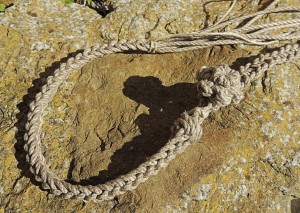 Now at this point you attach your chosen attachment, in my case I chose to us a Carabina. Just use two of the six strands to secure the Carabina. Once secured you can then lock the two securing strands in place with some string and constrictor knots above the Carbbina. Once secured the excess cords can then be cut off, just leaving four cords to work with. With the four reamining strands make a series of crown knots one on top of the other working down the cord. Finally make a crown knot over a wall knot and then double it. Afterwards cut off the remaining strands to leave just the knot exposed.

You should now have a knife lanyard to be proud of!

Click on Images to view full size.Here is a Video that I recently did on making a knife lanyard:

This is a long knife lanyard that I recently made for my Myerchin Knife. I wanted a lanyard that I could either attach to my wrist or to my belt. So based on some of the information described above, I created this version. I did not want it to be too fussy, I just wanted it to be very practical and look good.

With this knife lanyard, I wanted a snap shackle at the end, so that I could interchange my tools quickly. This Knife Lanyard was made with 2mm black tarred line.

How to Tie a Long Knife Lanyard Video

In this video, you will be guided in how to make a very decorative knife lanyard.