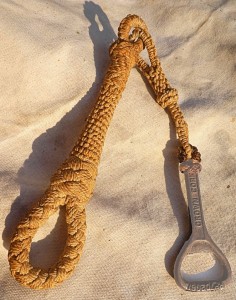 How I Got into Knotting

I thought that for my first post I would like to explain how I got into knotting.

Many years ago (early 1960’s) my father was stationed in Aden. We would often go to the beach in the afternoons, as the army there worked a topical routine. For me it was great, I would swim in the sea or the nearby pool and not have a care in the world – why would I, I was only about 5.

Finding Old Rope to Knot With

One thing that I do remember was that a friend of my dad’s Rory Bell would wonder along the beach and collect old discarded rope and fishing nets to make things out of it. The bottle opener decorative handle below is just one example of his work.

At this time I had no interest in knotting or in what he was doing, it was just part of the routine of being there. We would sit on the beach and Rory would either untangle his finds, or spend time creating some form of knotted creation

Memories of the Beach in Aden

Anyway, a couple of years ago my mother died and dad left the house to become a Chelsea Pensioner. It was when clearing the house out that I came across the above bottle opener. Wow, holding it just brought back all the wonderful memories of being a child in Aden.

How Hard is Decorative Knotting

I also thought to myself how hard is it to make such a thing? Funnily enough on clearing my father’s house, he also had a leather bound copy of the Ashley Book of Knots, this too belonged to Rory. It was he that bound it in leather. On one of the blank pages near the back of the book, Rory has written, how bloody hard it was to learn bookbinding. I got the impression that it did make him swear a lot!

So with a copy of Ashley’s Book of Knots, how hard can it be to make something decorative? I found that Ashley’s was a little too complicated for my simple mind. It was not until I got a copy of Des Pawson’s book, that this black art became a little easier to understand.

Well I am now in my second year of doing this “frustrating” art, I still have a long way to go to achieve something similar to the above.

So my plan is to write this blog, show the good and the ugly and see if I will ever match that standard that has been set by Rory.

What is the Best Book to Learn Decorative Knotting?

Even though Ashley’s Book of Knots covers just about every knot there is, I found it at time rather difficult to understand and follow. The best book in my opinion to learn decorative knotting is, Des Pawson’s Book – Knot Craft and Rope Mats.