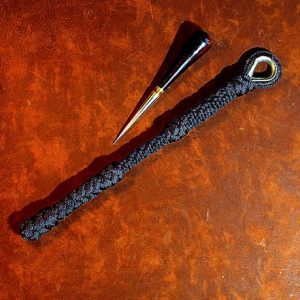 How to make a Bell Rope (Black)

There are many ways of making a bell rope. If you search this site How to Make a Bell Rope, you will see there are a number of posts on making a bell rope. For the Bell Rope in this post, I wanted to make a small thin flexible bell rope, but still well presented and decorated. The other thing that I wanted to do, was make a completely black bell rope. Mainly because I recently found a good supply of Black Tarred Line in the UK, I wanted to experiment and see how black bell rope would turn out. Secondly, this bell rope would be fitted to a small bell, so I could not make a large bell rope like I usually do.

Cockscombing for Making the Eye of the Bell Rope

I found some old three strand rope that I planned on using for making my bell rope. The idea would be using the old rope as a core for my bell rope. Now, this was my first little mistake, as the rope was not hard lay (it was a little floppy). At the time I did not think that this would matter, but making the bell rope with a harder lay rope is preferable. It is easier to add decorative knot work to a harder surface, than a softer one.

Overhand Grafting on a Bell Rope

The making of this bell rope was a little experimental, so I thought that maybe I would make part of the bell rope using Overhand Grafting. There are a number of different forms of grafting, some are more intricate than others. Also when grafting, different coloured cordage can be used to great effect. So I chose black! How to Overhand Grafting.

Turks Head Covers All Sins on a Bell Rope

I then decided to tidy up the top of the bell rope, and cover all the horrible strands that were at the start of my Grafting. So in this case I tied a 4 bight by 5 Lead Turks Head with three passes, to cover all those sinners. Whenever you see a Turks Head, ask yourself what mess are they covering. How to Tie a Turks Head.

Back Splice a Bell Rope Handle

Having done my Overhand Grafting, I then decided to create a handhold for ringing the bell. I decided roughly how long I wanted the bell to be, then added enough for me to back splice the rope to create a hand hold at the end of the rope. How to Back Splice Rope.

Once I had back spliced my rope to create a handhold for the bell rope, I decided to cover this with a long Turks Head. In this particular case I chose a 4 bight 21 lead Turks Head with three passes. I actually made the long Turks Head on a piece of plastic pip, then transferred that to my Back Spliced handle. How to Tie a Long Turks Head. I did not cut off the ends of the back splice, until I knew just how long the Turks Head would be once it had three passes and was pulled up tight.

Once the Turks Head handle and Globe Knot were completed, I then finished off the Overhand Grafting till is butted up against the long Turks Head.

The finally I tied two more Turks Heads to cover some more sins. You will see in the picture, I have place the one pass Turks Heads next to where they will be placed. These Turks Heads will eventually have three passes, to match the other Turks Heads.

Making a bell rope is a bit of a challenge, but making a black one is a little harder. You do need good bright light to see what you are doing. Working with tarred line also presented it’s own challenges. The more you work the knots and the warmer the work gets in your hands, the more the tar melts. I certainly plan to make a full size bell rope for my large bell. Just another thought, photographing a black bell rope ain’t easy either!!