How wonderful it was to have a weekend break on the canal near Bath. The weather was glorious and ‘Leah’ was a beautiful 54ft long narrow boat. We sailed from Bradford on Avon and headed towards Bath.

The first thing that amazed me was the beautiful scenery that flooded over us as soon as we left the marina. OK we all expect the view from the boat along a river to be wonderful, but we were on a canal! The big difference being that a river will follow the folds of the landscape, but a canal is carved into the landscape. As we travelled we were actually looking down at some of the scenery and into the valleys below us. You would expect that a view from a boat is a low as you get, well other than a submarine that is. Also on two occasions we transited a viaduct that took us over a river and a railway line hundreds of feet below us (OK maybe not hundreds, but it certainly looked a long way down!).

Watch this video to get an idea of the scenery.

So what has this got to do with knots? (Just setting the scene, that’s all).

Down to the knots then. Every where you looked you would see knots. Nearly every single craft on the canal had ornate rope fenders. Some where rather beautiful, whilst others were rather tatty and rotten. However they were on the boats for a reason and not just for decoration!

I would have loved to have taken more photos, but I was also tasked with manoeuvring the boat. The main reason was that I enjoyed it, but also no one else wanted to take responsibility if things went wrong. 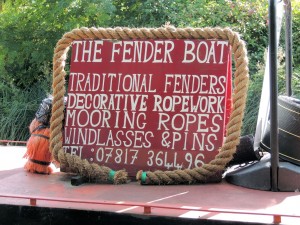 On the journey we came across ‘The Fender Boat’ which was manned by a really nice chap, but sadly I do not recall his name. He was telling me a little about his life on the rivers and canals, also about how he makes fenders that enable him to live on the canal boat.

On the top of his boat he had a huge Monkey Fist knot, he said that this was the knot that would always make people curios about the work that he did. 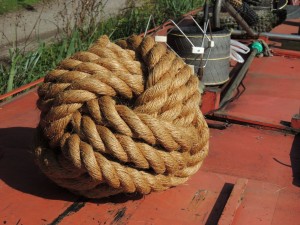 I also notice that he had a fine example of a bell rope hanging in the window of his boat. He kindly showed it to me and let me handle it. I always find that handling someone’s rope work is firstly a great privilege to be allowed to; secondly, you get to feel not only the skill that went into making the rope, but also the firmness of the knots. The knots in the bell rope were superbly tied and felt as hard as steel – the sign of a true craftsman’s work. We both had a chuckle about the difficulties we experienced in the art of coach whipping. 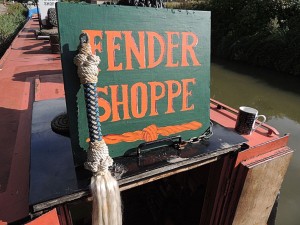 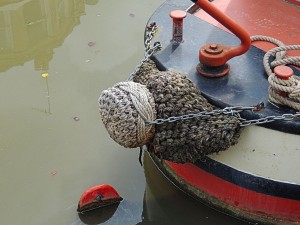 Here is a video to show how beautiful the area is: