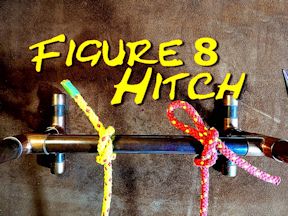 How to Tie the Figure of 8 Hitch

The Figure of 8 Hitch is a rather useful knot to know, but it is more suited to light duties. This hitch is a great knot to use for a temporary way of attaching your rope to an object. When using the slipped or exploding version of this hitch, it should be used with even more caution as the hitch can far to easily be released.

In Ashley’s Book of Knots the slipped version of the Figure of Eight Hitch was tied in wicks and used for candle dipping. In the video I try to show how this hitch was used when making candles. However, you are probably better off watching a video just on that subject!