On Tuesday 11 February 2014 we had another interesting meeting at the IGKT Solent branch. As a part of the meeting, the homework set was the Fiador Knot, also known as the Theodore Knot, ABOK pg 201. Examples of this were shown to the group in the form of Argentine Head Stall with Fiador Knot. Sadly I did not take a photo of this.

We were then given a demonstration by Eddie and Pauline Bentleyon how to Sprang. Sprang is a very ancient way of interlacing twine which has a natural elasticity. In appearance it is very similar to netting, but it is created entirely from twisting warp threads. Archaeological evidence has shown that Sprang actually pre-dates knitting; Although the finished result looks similar to knitting with two needles, the actual production requires two completely different techniques.

OK, I am not even going to attempt to tell you on how it is done, but you will find an excellent Youtube video here on How to Sprang:

Also a search on Youtube will bring you even more results on how to Sprang.

Here are a couple of pictures taken from the demonstration: 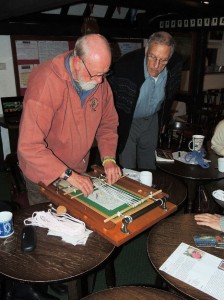 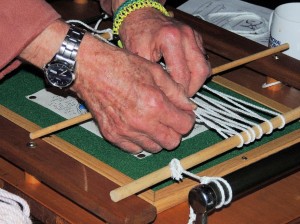