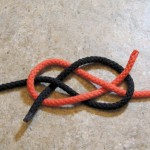 The Carrick Bend is generally used when working with large hawsers or cable that do not easily create tight bends or tucks. The other good thing about the Carrick Bend is that it will not readily slip when under strain.

Then pull up on all the end to tighten the knot.

How to Tie the Carrick Bend Video: